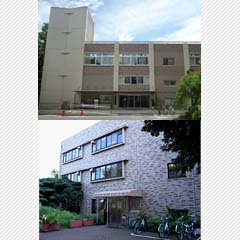 The Faculty has its own library which was established by a donation from the alumni and with the aid of the Rockefeller Foundation in 1965.Former libraries of the various departments were then incorporated into one library. The Library lists 380,000 volumes of books and periodicals dealing with agricultural and other natural sciences. Currently, the library subscribes to about 3,755 titles of periodicals.

In 1977, the Library was designated by the Ministry of Education, Science and Culture as the Central Library for foreign agrobiological periodicals, and functions as such by collecting domestically rare foreign periodicals and providing services to affiliates of other institutions.